The National Band Association is pleased to announce that Dr. Julian White and Mr. Roy Holder are the 2021 recipients of the Al and Gladys Wright Distinguished Legacy Award. This award is presented for lifetime achievement rather than for a single contribution, no matter how monumental. Nominees must have a minimum of 30 years of distinguished service to the profession, supporting the mission and goals of the National Band Association, which include the promotion of the concert band and concert band music, teaching, mentorship, scholarship, and service to the band profession.

Congratulations on this well-deserved honor, Dr. White and Mr. Holder!

Dr. Julian Earl White, retired Distinguished Professor of Music, Director of Bands and Chairman of the Music Department at Florida A&M University, graduated from Florida A&M University earning a Bachelor’s Degree in Music Education. He later received a Master’s Degree from the University of Illinois, and the Doctor of Philosophy Degree from The Florida State University. Dr. White served as Band Director of The William M. Raines High School for 10 years. The band consistently received superior ratings in marching and concert band assessments.  Under Dr. White’s leadership, the Florida A&M University Wind Ensemble presented a concert at the American Bandmasters Association Convention, and numerous others across the country. In 2009, the Wind Ensemble was invited to perform a concert at Carnegie Hall. The internationally acclaimed “Marching 100” rendered performances at three Super Bowls, The Grammys, The ESPY nationally televised awards ceremony, CBS Game Day, and the Inaugural Parade for President Barak Obama. Dr. White was the recipient of the Distinguished Professor/Advanced Teacher of the Year Award, the University Superior Teacher Accomplishment Award, and was a three-time recipient of the University Teacher of the Year Award. He received the NAACP Achievement Award, The Thurgood Marshall Outstanding Achievers Award sponsored by the FED EX Orange Bowl, the Martin Luther King, Jr. Leadership Award, the Retime Achievement Award from the Kappa Delta Chapter of Alpha Phi Omega National Service Fraternity, Inc., and the Richard Allen Educational Achievement Award, presented by the AME Church. Dr. White was a recipient of the Florida A&M University National Alumni Association Distinguished Alumni Award. He was also honored to receive the Kappa Kappa Psi National Honorary Band Fraternity National Service Award, the highest award bestowed upon a member of the fraternity. Dr. White is an elected member of the prestigious American Bandmasters Association and serves on the John Phillip Sousa Foundation Sudler Award Committee. 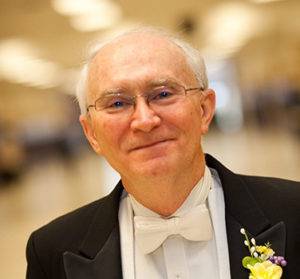 Roy Holder
In addition to being Past President of the NBA, Roy Holder has served on the Board of the American Bandmasters Association and Chairs the ABA School Bands Task Force. He also serves as a Vice President and as Chair of the Sudler Flag of Honor Committee for the John Philip Sousa Foundation. During his 42 years working as a high school band director Mr. Holder has been recognized with professional honors by ETSBOA, VBODA, Phi Mu Alpha, Fairfax County Public Schools, Wolf Trap, Who’s Who Among America’s Teachers, the National Band Association, the Sousa Foundation, the US Army Band, the National Symphony, and the accomplishments of his Lake Braddock Band program have twice been read into the US Congressional Record. Mr. Holder is member of the Virginia Honor Band Hall of Fame, the East Tennessee School Band and Orchestra Directors Hall of Fame, and the Virginia Band and Orchestra Directors Hall of Fame. In June of 2011 the Lake Braddock Secondary School Band was awarded the 30-year Honor Band Plaque from VBODA. Additionally, ensembles under Mr. Holder’s direction have performed at the John F. Kennedy Center, the Federal Reserve, the Pentagon, 4 times at the Virginia Music Educators Association In Service Conference, 3 times for the Midwest International Band and Orchestra Clinic, for the American Bandmasters Association Convention and completed a concert tour of China sponsored by the US-China Cultural and Educational Foundation.