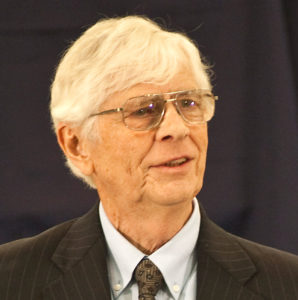 The National Band Association is saddened to learn of the passing of Dr. William J. (Bill) Moody, NBA Past-President (1968-1970).   He was a teacher, mentor, leader, and inspirational thinker who encouraged and motivated many in the band profession. With the NBA, Dr. Moody continued to serve the organization long after his Presidency. He was the lead writer for the NBA mission statement, and for the last number of years served as Chair of the Board of Electors for the NBA Hall of Fame of Distinguished Conductors. Dr. Moody was a recipient of the NBA AWAPA award in 2003, and was inducted into the NBA Hall of Fame in 2010. His loss will be felt by many in our profession.